Our Energy Analysts are ready to assist as you decide if solar energy is right for your business. We'll help you review your energy footprint, best practices, and energy-saving recommendations to help you make the best decision to meet your businesses' financial and environmental goals. Call (863) 834-9535 Monday through Friday from 7:30 a.m. to 6:00 p.m. to schedule an appointment.  Sign In To My Account
Step 1 - Calculate Costs
Before deciding to install a solar electric system, it is important to review the financial implications and get a sense of the total out-of-pocket cost you might expect to pay. Both set and variable costs will contribute to this total amount.

To help estimate the variable costs, check out our Solar Calculator above.

Do note that certain factors may affect these costs. For example, the size of your roof and its orientation as well as other factors like shading from trees, can result in purchasing more or less energy than expected, thus affecting your monthly costs.

These additional links may help you determine if your house is a good candidate for solar:
*These sites are independent of Lakeland Electric. They are estimates only. Their results may vary from our solar calculator results. These sites are only an additional reference and not guaranteed by Lakeland Electric.
Step 2 - Review and Agreement
If you decide that a solar electric system is right for you, there are a couple of things you need to know:

Any customer, whether residential or commercial, who wishes to participate in the Program is required to review, sign and abide by the requirements of one of these agreements.

Our solar process is designed to review equipment to ensure it meets the proper specifications, codes and UL listings. Keeping your home safe is just one of the things we want to assist with as you consider a solar installation.
Step 3 - Select Contractor
Once you have determined that installing a solar electric system makes sense, you will need to select a licensed solar electric dealer and installer. Once selected, your contractor will help you complete and comply with the photovoltaic generator agreement. Beware of any contractor that is not willing to help you comply with this agreement.

Need more information? We're always here to help, just send us a note and we'll walk you through the process and answer your questions:

All requests for PV interconnection
Commercial should be referred to:
Jordan Faison
Jordan.Faison@lakelandelectric.com

All inquiries on “Net Metering” / “RSD” questions should be referred to:
SolarRates@lakelandelectric.com

What is Interconnection of a PV system? PV interconnection occurs when a solar-powered generating system is installed on the customer side of the utility meter and operates alongside the utility's electrical service to the property. The energy produced by this generator is primarily intended to offset part or all of a customer's annual electricity requirements.

Any customer, who wishes to participate in the program is required to review, sign, and abide by the requirements of one of these agreements.

How Does It Work?

The Solar Price Plan is a combination of two parts:

All your energy for the month is billed at $0.02427 per kilowatt hour (kWh) regardless of when it is used. This rate is less than half what you would pay on the standard plan.

Demand is the amount of power needed to supply every electrical device running in your home at a specific point in time.

Think about it like your Internet service. When one person streams a movie or television show on a device in your home, the stream works perfectly. But as additional people in your home attempt to stream video at the same time, more bandwidth is needed.

Certain appliances – such as HVAC units, electric ovens and clothes dryers – demand significant power from the grid. That's why not running them at the same time is important to minimize the Demand Charge.

The graphic below illustrates this concept and why managing demand has a positive effect on the power grid. 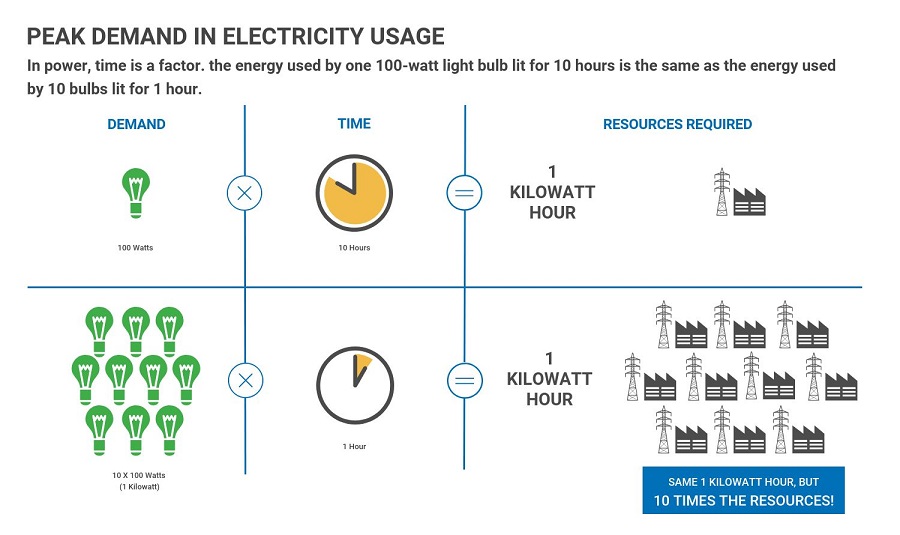 Why is a Solar Price Plan necessary?

Peaks in usage are a major challenge for all utility companies. Lakeland Electric must maintain the ability to generate and deliver enough electricity to meet these peak periods, but that infrastructure goes largely unused during the rest of the day.

Solar customers do not pay for energy or at least as much energy when the sun is shining brightly. Many even receive credits when they produce more than they use. However, they still need the grid and the power plants during times when the sun isn't shining.

By encouraging customers to shift their highest demands for energy to non-peak times, overall costs go down, and everyone benefits.

Did you know Lakeland Electric has a total of 5 Solar Farms right here in Lakeland?

This means, when the sun is shining on a summer day, Lakeland Electric has the capability to generate about 15 megawatts of power.